“I am a sort of materialist, in that I believe that making good work comes from developing a deep relationship with your tools and materials.”

I'm still working on getting a proper work table since I have space for it now, but I'm too broke to buy furniture. 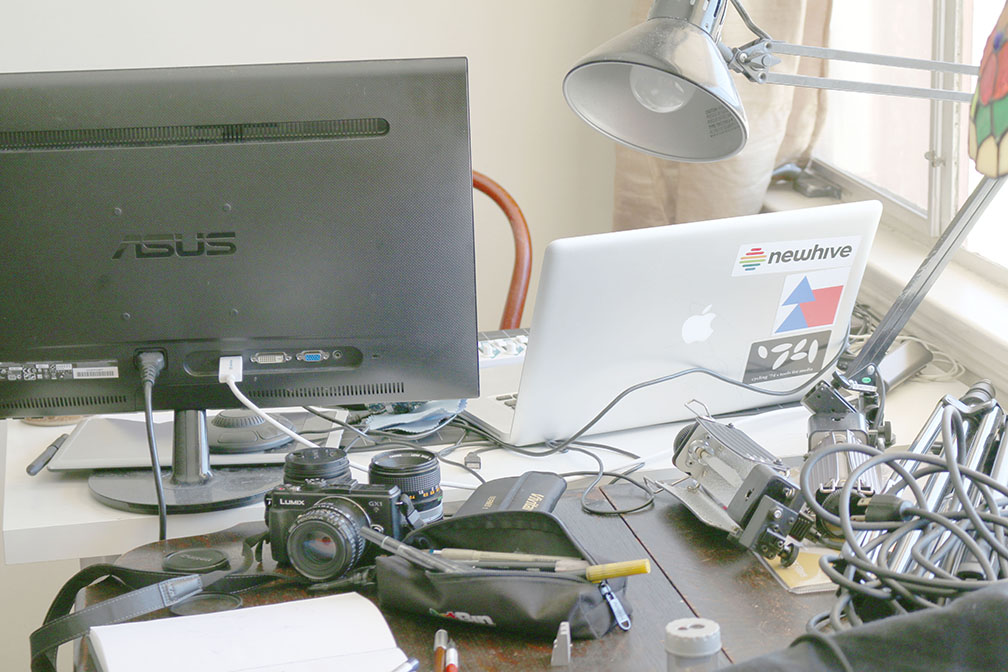 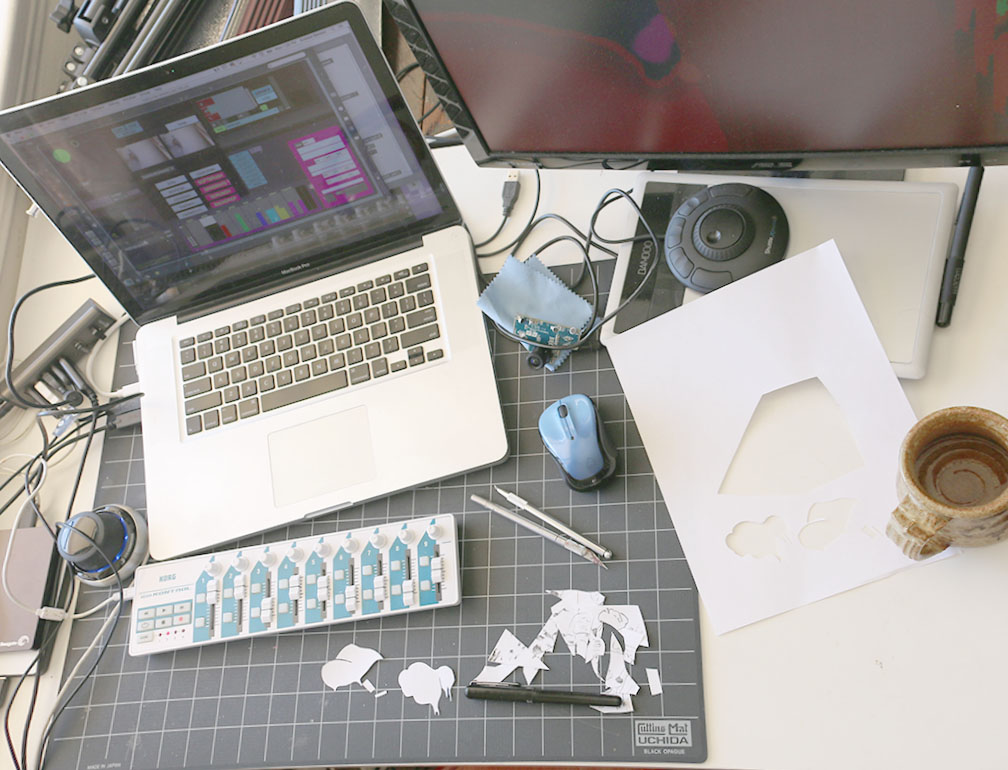 Sometimes I work out graphics or animation ideas by cutting up bits of paper and moving them around. 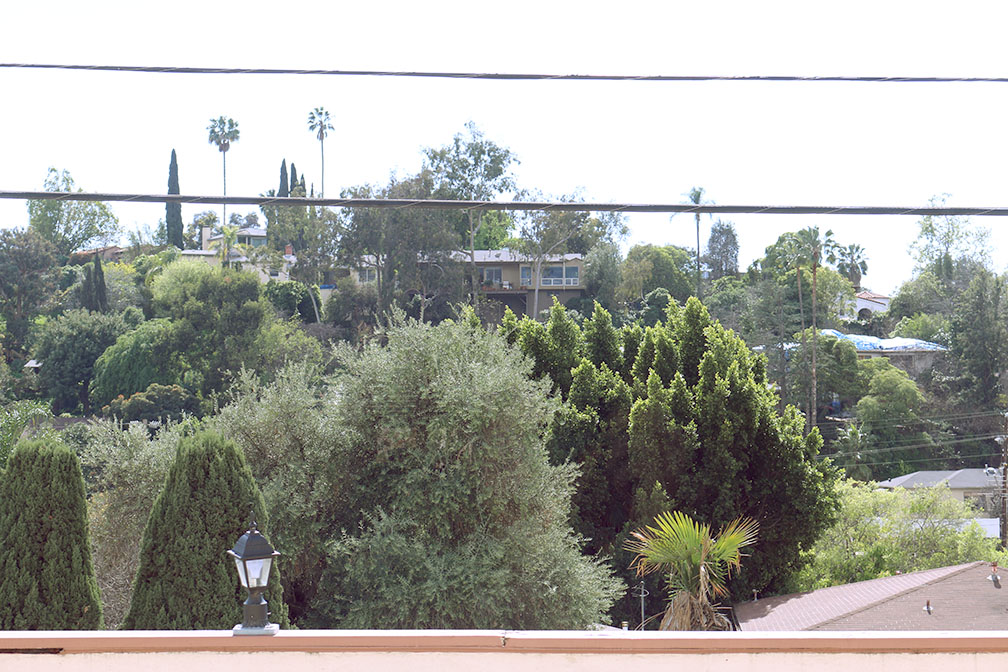 I usually keep a tab open with Twitter when I'm working at night. Late night Twitter is like having studio mates where I can chatter a little and then get back to work and it's easy. I feel like there's a lot of us with that kind of thing going. Most of my studio time happens after the kids are asleep, so I tend to keep it pretty quiet and I like it like that mostly. If I do listen, I often play the same album over and over. I like to really get to know music, and my taste is all over. I spent a month recently listening to that Tove Lo album on repeat and Miley Cyrus' Bangerz, and stuff like that. Pink Floyd's Piper at the Gates of Dawn is something I've come back to a lot, and if I ever want to get psyched about something it's M.I.A.'s Bamboo Banga. I did some live video work with her years ago where she'd start the set with that and it still gets me every time. I also really like The Boredoms, OOIOO, Takako Minekawa, FKA Twigs, Flying Lotus, Hall and Oates, HEALTH, Grimes, Lightning Bolt, MGMT, Rihanna, Sonic Youth, Bikini Kill, TV on the Radio, that one Yeasayer album with the good synth sounds, Wham, Barrington Levy, Crystal Castles, Chairlift, of course Britney Spears, Blood Orange, BILLY OCEAN, Ariel Pink, Baden Powell, Araabmuzik, and Anton Webern. At least, that's what shows up on my recent listening history. I recommend all of it. 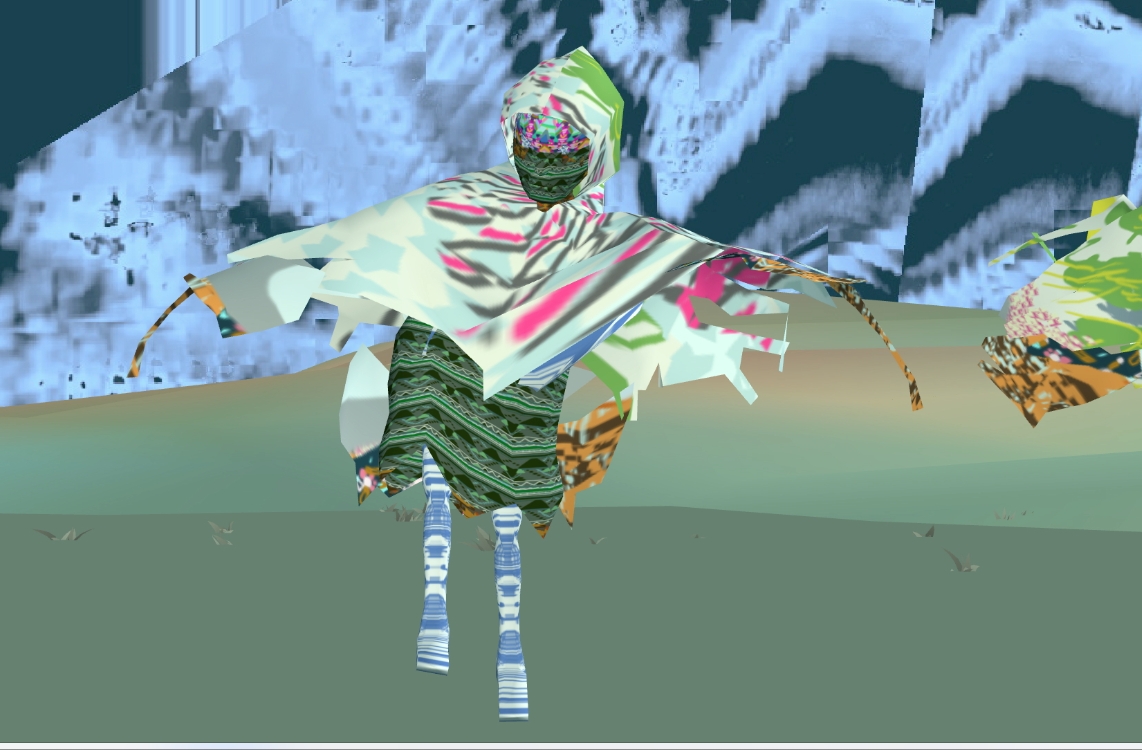 I'm wrapping up an animated short I have been working on with Lourdes Portillo for the past year or so. It is the first narrative short I've made, so it forced me to learn a lot about organizing my work, and how to tell stories. Neither Lourdes or myself had much experience with this sort of project, and she is coming from a Documentary Film background, so we've worked it out in a very ad-hoc way.

Here is a compilation of some short little studies and idea sketches that I've been doing lately for an as-yet-undetermined thing that might be many things: https://vimeo.com/119211363

I've also constantly got other projects brewing, new experimental videos, animated GIFs, HTML5/WebGL things, and stuff. I've been slacking lately, but I try to keep Wolf+Unicorn going as well, and have some other similar ideas that I want to explore more.

Also, I'm getting a natural yeast culture going since I just moved to LA and don't have any friends, and baked my first loaf of LA bread the other day. It was great!

I started Wolf+Unicorn just after my second daughter Greta was born when I was still in the very vulnerable and open and sleep-deprived time when you have a newborn, and I started making it without really knowing what I was doing. It was something I could do in between other things and feel like I was still working on something. I kept it a secret for a long time, and didn't tell anyone I knew that I was making these GIFs and posting them on tumblr and really didn't want to admit it to anyone. Then Brian Droitcour was visiting SF and we met at Haus coffee and I sheepishly showed it to him and he told me it was the best thing he'd seen in some time. He was the first art person I showed it to. On Valentine's Day I finally decided to tell everyone about it, and there was this period of 2 weeks where nobody seemed to know what to say to me about it. A lot of people were like, "I'm really confused about this." Since then I've gotten really positive feedback and some really devoted and wonderful fans on tumblr. Even art people seem to think it's cool.

I'm also really psyched about some of the WebGL-based work I've put out in the last year. I taught myself WebGL from scratch in 2013 because there was some stuff I wanted to do with framebuffers that was too difficult to figure out in three.js, and I'm already pretty familiar with OpenGL programming. Since then I've made a virtual art exhibition, my interactive flow feedback camera experiments, and cool generative feedback things like MELTER!, GGGG, and Creeper.

My main tools right now are Cycling '74 Max and Autodesk Maya, and a big bulk of my work happens in text editors since I started working on web stuff more. I also use Photoshop, Illustrator, Ableton Live, and Quicktime Pro a lot. The most important tools of all are my sketchbook and pencils and pens. That's where a lot of the work gets done.

A lot of my work grows out of tinkering around with technical ideas or finding some little way to make something move. Very often I'll have an idea while going for a walk or spacing out, or drawing, and then when I get a chance I'll try to jam together a rough version of it using whatever I can. If I like how it works/looks, I'll start fooling around and developing it. Early in a project there's usually a lot of messing around, and then something will look good. I don't edit much, and try to do as much in realtime as possible to capture a moment. But this is all totally different if I'm animating. Even though I do a lot more figure driven work now, I feel like I still think like an abstract painter and sound artist.

Never go viral. That is the worst. Stop reading the analytics. Work every day. Figure out how things work so you can change it. Make lots of friends and support people who's work you really love. Have babies and get married and do all the things everybody tells you are going to ruin your career. Find your thing and then force yourself to do the opposite thing. Get a job that pays you enough to pay rent so you aren't as likely to get suckered by people. Note that 95% of your peers won't be doing this in 5 years, so you have to keep making work no matter what. Keep making websites that nobody searches for.

The Old Zoo and Observatory in Griffith Park, Sunset Blvd, 24th St. in SF, the top of Bernal Hill, Fossil Falls, the Pinnacles, the Pacific Ocean, little shacks in the Mojave desert, the Anne Bremer Memorial Library at SFAI, my kitchen, any forested path for walking.

…so many more that I can't think of off the top of my head. I'm a major art fan and I know a lot of really talented people so it's difficult to name them all like this, so if you are reading this and you are like "why didn't he mention me?" it's because it's so obvious that I don't even need to mention it and I of course do.

Thanks for the interview,
Andrew