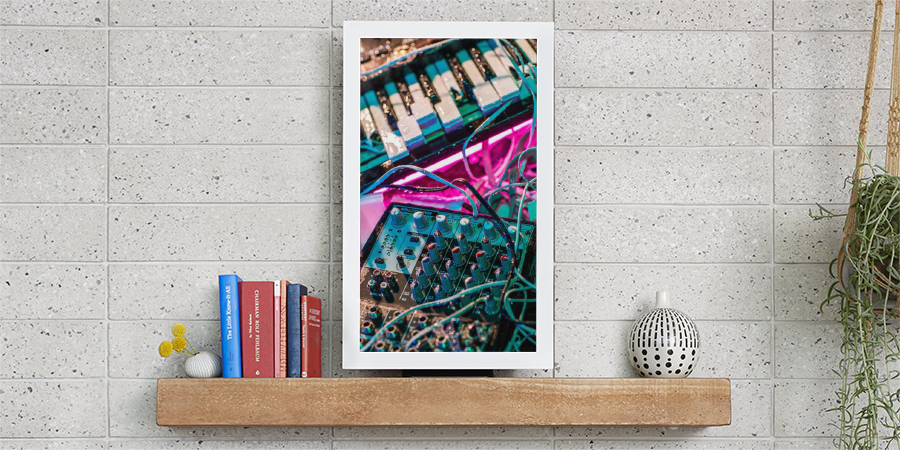 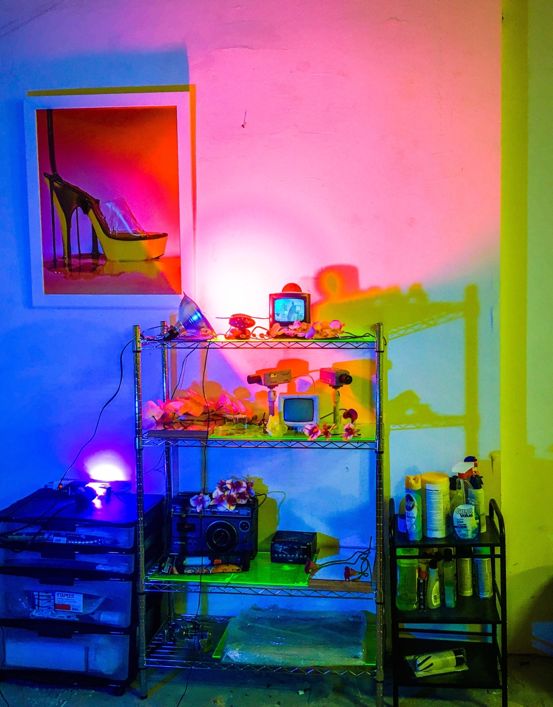 Here’s a photo of my new studio as part of the Artha Project in Long Island City. It’s the first studio I’ve ever had, and I’ll be here for the next year.

I listen to techno and house mixes on soundcloud when I’m doing more thought-based/physical performance work. I’m listening to Juliana Huxtable’s Discwoman mix right now.
I listen to rap when I’m working in photoshop/on anything that isn’t too thought-centric. I like the bravado expressed in rap music. Rappers and comedians are our modern philosophers and poets. 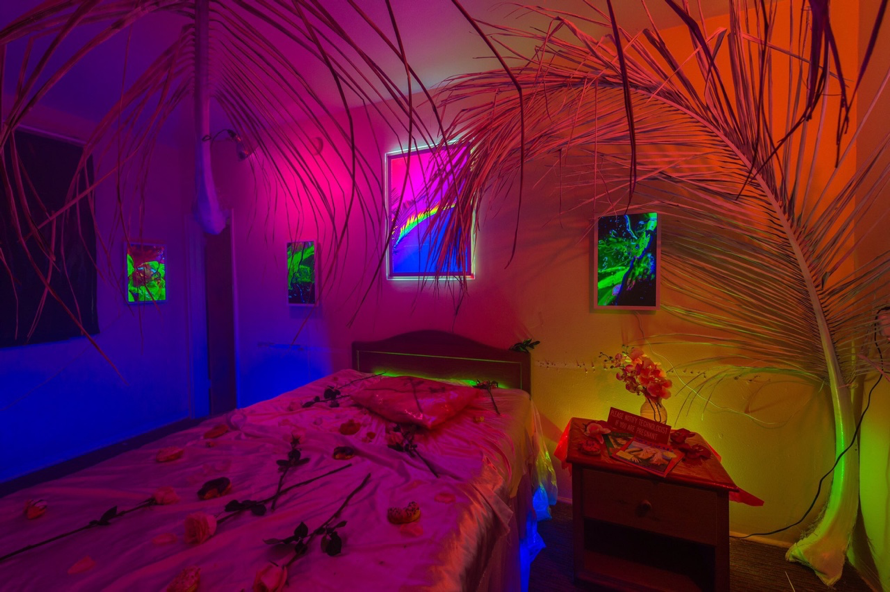 I just finished an installation in Miami with Castor Gallery called Entropical Getaway, which was a part of the Satellite Art Fair. It was inspired by the depressing political climate we’re currently amidst, met with the paradox of a partaking in a luxurious Miami art vacation.
The Satellite Art Fair was held in the Parisian Hotel, so I wanted to use the sleazy motel setting to create an environment that evoked some of the feelings that one encounters when checking into a 2-star hotel room. Desire, consumption, escapism, and debauchery were all things on my mind. I wanted it to look and feel like a lush apocalypse-- even though you’re checking in to escape the perils of the outside world, the inevitability of entropy and decay is all around us, be it in the dead palm fronds or in my photos and videos on display. 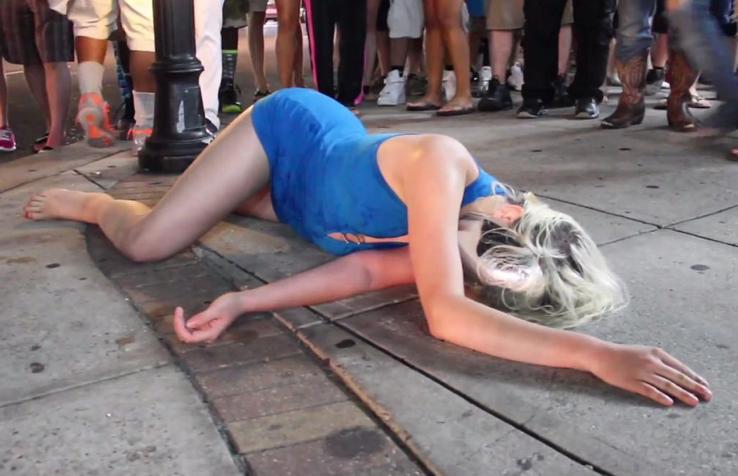 American Reflexxx, a short film/performance I made with Alli Coates, is my proudest work to date. The piece checked off so many things on my “Artist’s To-Do List”, but there’s still so much more work to be done.

My body, my mind, my phone, my computer, my Wacom Tablet, Photoshop, Lightroom, color changing lights, the dictionary, Google searches, the infinite canvas of actual reality.

It usually varies from project to project. Usually I start out by ideating on my inspirations by writing in my notebook and letting my mind flow. Once I get some concepts down on paper I try to think about the best way to go about executing. Does this idea lend itself to a photo? A video? A performance? If it’s an installation, how are we going to design the room to compliment the ideas and aesthetics involved? I’ll then pull some reference images to create an overarching presentation of what it is that I’m seeking to accomplish. I try to use as many of my own images on my mood boards as possible, as I think it’s important to not be too influenced/derivative of other people’s art. Then I’ll go about creating bullet points outlining each project, and creating a succinct project proposal.
I love immersing myself in the full spectrum that creativity promotes, so there’s really no set way of approaching any given job. But I do find that organizing my mind & categorizing my inspiration is a crucial aspect of getting work done, be it for an installation, a music video, a photo series, or a performance.

One of my big mantras is “Ignore the noise, hard work pays off.” I think it’s really important to spend a few hours a week away from the noise of the internet and allowing your mind to unwind and think about what’s naturally flowing through you. When I turn off the feed, I find that I can write pages upon pages of scrawling, sprawling thoughts in my notebook, and that’s where some of my purest concepts derive from. Once I have those ideas, I think about how they’re going to turn into actual reality, which often requires hard work and determination.
It’s important to stay engaged in the things that matter to you, be it politics or pop culture or critical theory or technology... whatever it is that inspires you, stay attuned to it and explore those interests and ideas in your work. Read books and articles. Watch factual documentaries & listen to podcasts. Go to museums. Fill your mind with information, because knowledge is a weapon. Ask “Why?” to everything, all the time. The answers will come out in your art practice. 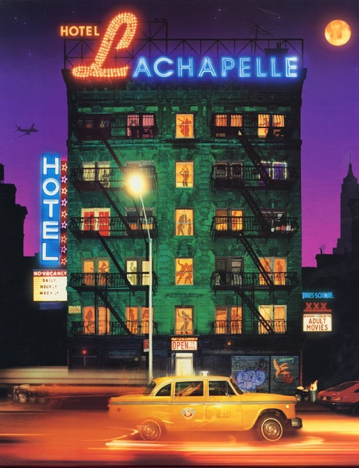 David Lachapelle’s Hotel Lachapelle book
The person who made me want to become a photographer. I pored over this book almost every day for a year straight when I was a teenager. 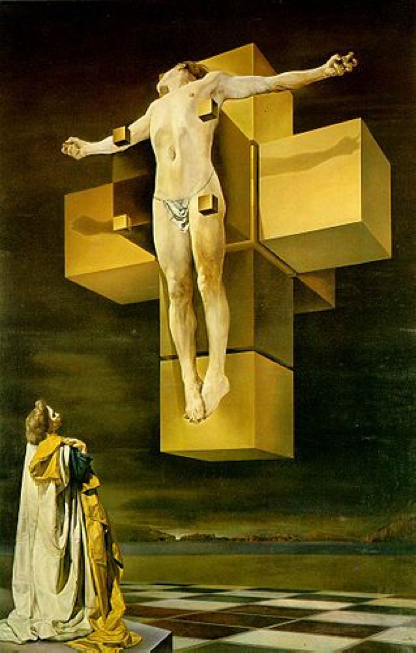 Salvador Dali - Crucifixion (Corpus Hypercubus)
I saw this painting at the National Gallery in DC when I was in high school and I remember it terrified me. I’m not a very religious person, and wasn’t raised under any particular belief system, but this painting gave me some really insane feelings at the time, and it still does-- I honestly got stressed out just Googling this picture. The fact that it’s a depiction of Jesus “on the polyhedron net of a tesseract (hypercube)” is… truly why art exists. 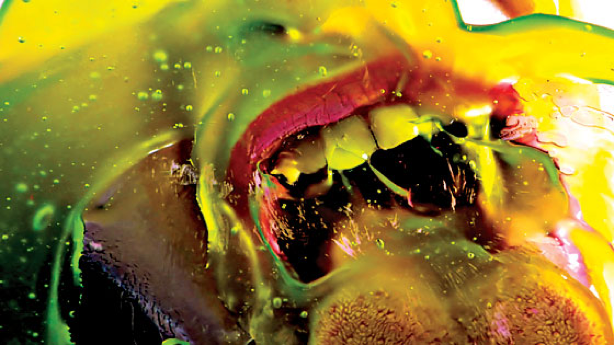 Marilyn Minter’s Green Pink Caviar series
I saw this when I first moved to NYC in 2007 and it had a profound effect on my conception of what art could be. I remember she was exhibiting this video series in Times Square, and I thought that was the coolest thing in the entire world. I still do. 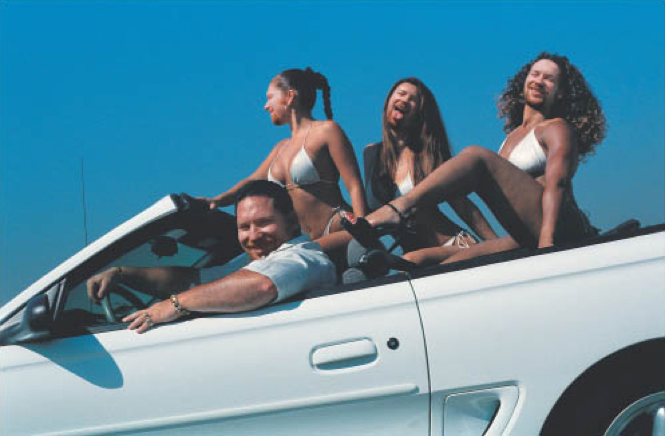 Aphex Twin & Chris Cunningham’s Windowlicker video/photos
Aphex Twin is a big influence for me in a lot of different ways. When I saw the Windowlicker video I remember feeling like “Um… okay, so it’s all been done. There’s nothing left to do. Art is over.” But it ain’t over till it’s over.

What are the best places to see your work?

On your phone or inside one of my installations.

What sites do you visit for inspiration? 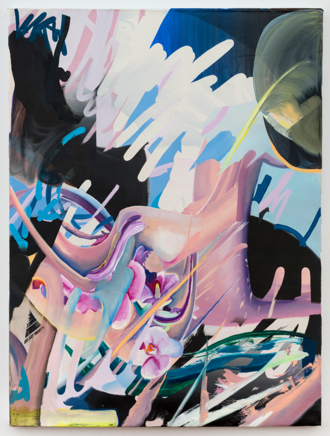 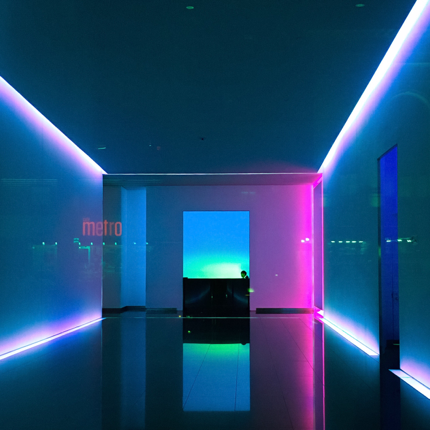 Dead Cells by Ilana Savdie /// James Turrell’s 505 5th Ave Installation
I don’t mean to sound biased, but I’m attracted to work that my friends make. I know some really talented people and I love seeing the progress they’re making. Some mentions include Ilana Savdie, FlucT, Safwat Riad, Eartheater, Juliana Huxtable, Fee Lion, Hot Sugar, Anne Vieux, James Moore, Lauren Gregory, and Sam Cannon.
With bigger artists, I lurk James Turrell more than I like to admit. I stop by his installation on 5th Avenue whenever I’m in the neighborhood, and will go out of my way to see his art whenever I’m travelling. I love Kanye West’s music & work as a provocateur. Regardless of his reputation or his personal life, I think he’s one of the greatest artists of our time. 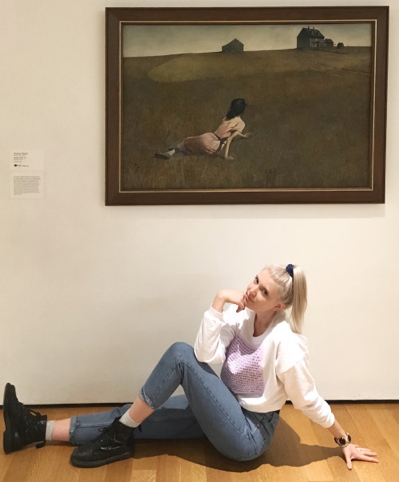 It might sound cliche, but the MoMA is like church. I love going there and feeling the aura of the space.. The halls are adorned with an incredibly sacred essence. I also love the Met. I worked there for two years and it has a very special, spiritual place in my mind.
As for galleries, I tend to gravitate to spaces downtown in SoHo and the Lower East Side.
A few standout exhibitions from this past year are: Sophia Al-Maria’s Black Friday installation at the Whitney, The ‘Art of Participation’ exhibit at the Tate Modern, Victor Hunt Gallery’s booth at Design/Miami, and 1985’s Glory Hole show at the Spring / Break Art Show.

Thanks for the interview,
Signe